Our God is Too Big Thoughts about faith 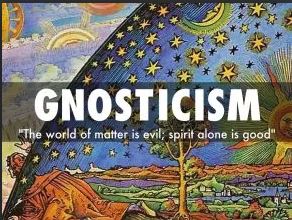 Gnosticism has been around since sometime after Plato and well before the time of Christ. The Jews considered it heretical as did the early Christians.

The Gnostics considered the spirit good but the body evil. The incarnation, or God becoming a man, presented a problem for them. How could the good spirit of God be corrupted by flesh? Some Gnostics held that Jesus’ body was just an illusion. Therefore, God did not taint himself by becoming flesh. This thinking requires a total disregard of Scripture. According to the Bible, our sins could only be paid for by the shedding of blood. It had to be the blood of the Messiah who was fully God and fully man. Jesus was called the “second Adam” who, like the first Adam, was a representative of all mankind. In Adam, all mankind fell into sin. In Jesus we have salvation as he is the second Adam. If his body was an illusion then we are still in our sins. No blood (only the illusion of blood) was spilled. Jesus only appeared to die on the cross.

The second solution was the belief that God created a slightly lesser spirit into which he put his “divine spark.” That spirit in turn created another lesser spirit. This process continued countless times until somewhere along the line a man was created with the remnants of this divine spark. This succession of beings is called emanations.  By having Jesus be a distant, distant, distant emanation from God it gets them around the problem of the good, spirit God, being tainted by flesh. Once again this contradicts the Bible which teaches that the Holy Spirit caused Mary to be pregnant with Jesus. No emanations. Such a distant emanation would not be fully God and fully man as the Bible teaches. Once again, we would be left in our sins.

These teachings were argued against in the New Testament and denied by the early church. The Gnostics formed communities away from mainstream Christianity. They created their own writings and tried to pass them off as being written by Biblical figures. Collectively they are referred to as “The Lost Books of the Bible.” One such book is the Gospel of Mary supposedly written by Mary Magdalene (the book refers to a Mary but does not say Mary Magdalene). A good portion of the book was lost but the Gnostics claim Jesus had a relationship with Mary and left her in charge of the church but patristic Peter (male chauvinist) silenced her and made sure no one knew of Jesus’ intentions. Thus, they had to preserve this truth. This “gospel”, though, dates to the late second century or early third century. Once again it contradicts the Bible. There is no Biblical account of Jesus having a special relationship with Mary (or any woman) or of his putting her in charge of the church. Instead he left the Apostles to lead the embryotic church. Why would Jesus appoint 12 men to be the disciples if he planned to put a woman in charge? Why not have a group of Apostles formed from both men and women? What evidence do they have that Peter was anti-women? Why would Peter disobey his Lord (in a major way) then go on an die as a martyr for him? Signaling out Peter to be the anti-Mary almost seems like something anti-Catholic as Protestants do not see Peter as having more authority than the other Apostles.

These books were never accepted by the early church nor written about. It is unreasonable to think Peter, or anyone, could so suppress the truth. Surely copies of the true Scriptures would have survived to testify to their failed efforts to silence the truth. Its fanciful story telling to try and support beliefs that are false. People have different reasons for accepting these teachings. Some see in them support for women pastors or priests. Some see access to “hidden knowledge” with a feeling of excitement at being among of small group of people who know the truth. Regardless of their reasons they are believing a lie which is leading them away from the truth.

This entry was posted on March 4, 2018 by ourgodistoobig. It was filed under Uncategorized .